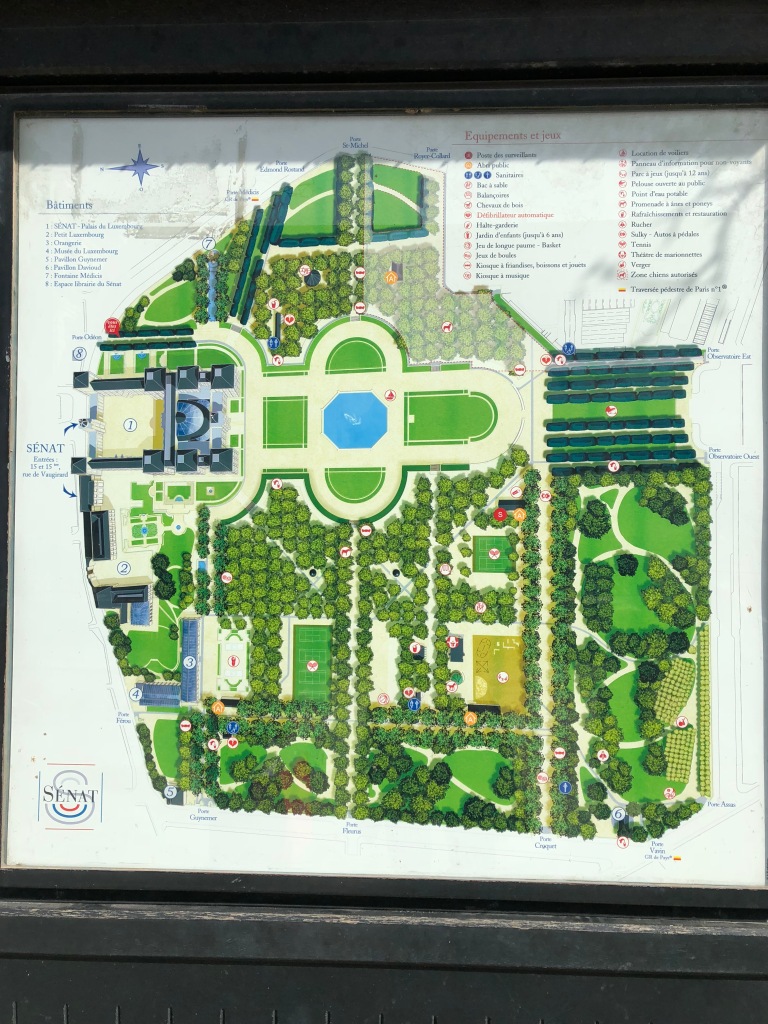 The Jardin du Luxembourg is just one of well over 400 municipal parks and gardens in Paris. This article, by Time Out, introduces one to the most well-known gardens: https://www.timeout.com/paris/en/things-to-do/the-ten-best-parks-gardens

Any one of these Paris gardens is well worth a visit. I have been to all of the ones mentioned on the Time Out’s list, at least once, over the last 3+ decades. Each one has a character of its own and they serve to delight one’s sense of nature but also give one an introduction to arrondissements one might, otherwise never visit.

However, it was easy for me to settle on the Luxembourg as my favorite. If you glance over the above map and see all the icons spotted on the map, it gives you some idea of the spaciousness (25 hectares/approximately 60 acres and considered to be the largest park in Paris) as well as the plethora of activities that take place there. Also, because it is the closest to where I settle when I come to Paris–the 6th arrondissement on the Left Bank–there is an obvious ease of access (10 minute walk). I am always stimulated by not only the changes of the season but also the wide range of people taking pleasure in everything it has to offer. The Luxembourg speaks to a sense of neighborhood–a shared backyard for all.

Lastly, the attachment has history for me. Years ago, when I lived in Paris for 3 months with my 7 year-old daughter, we claimed it as ‘our (shared) backyard’. Almost daily, I either took a run in the park after I walked her to school and/or, after a stop for a sweetie after school, (which, at that time, was a routine of the children) we headed to ‘our shared backyard’. The children’s playground area, obviously, had different structures for the children then, compared to now, but they still spelled curiosity and imagination to the children, as well as a challenge to their physical agility and resourcefulness.

Now, I’m not so sure this current play structure would ‘pass the muster’ in the USA, unless all parents signed a disclaimer before their child tackled the climb!

But what I have observed is the French tend to allow their children more freedom of movement, might I say. This little one looked barely 18 months and he seemed to be determined to try out all of these riding animals–running from one to the next, successfully tackling all of them and…all by himself!

There are more tame play tasks for the children too. This carousel is the oldest one in Paris, and, my research says it dates back to 1879. You might want to take a look at this link as it explains about the history of ‘capturing the rings’ as well as talking about several of the other well-known carousels in Paris: https://untappedcities.com/2013/01/24/six-beautiful-carousels-of-paris/ 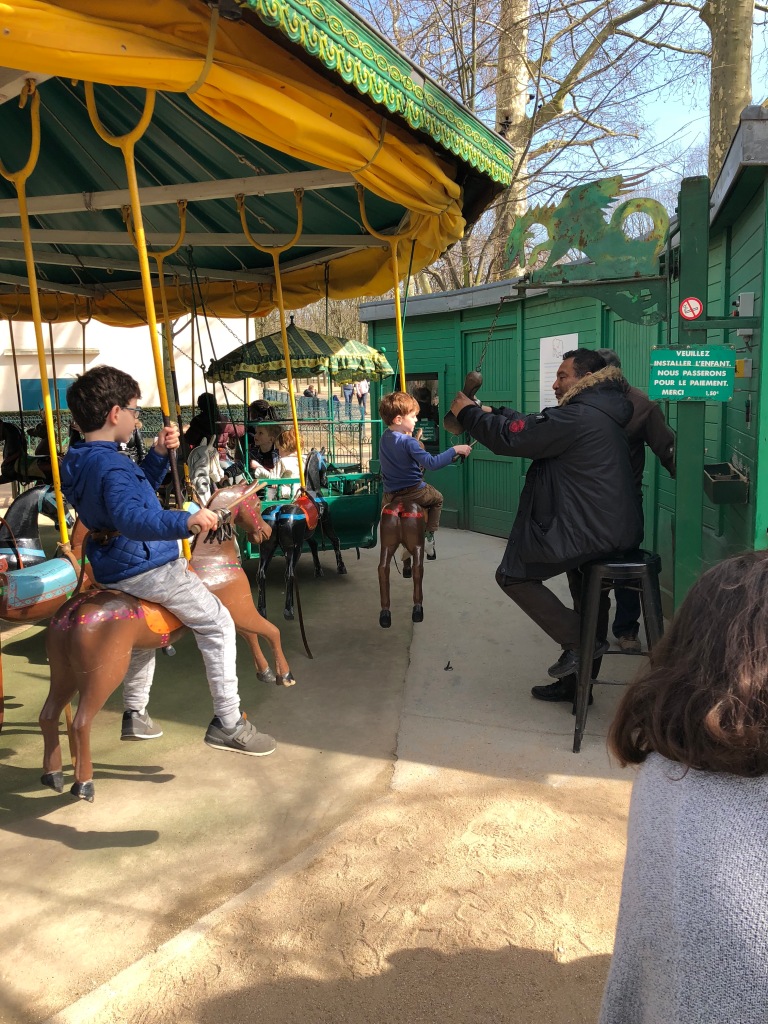 Pony rides were available when my daughter was 7 and they are still offered, yes, still to this day, often with the usual lines, because your child isn’t the only one that wants a ride! I see now, though, that they have the children wear helmets.

The pond acts as a central gathering point in the Luxembourg.

The children still enjoy sailing the rented boats. And, THE one takes time to ferret out, as witnessed here.

Or, the sandboxes seem ‘in ready’ for some shovels and pails as well as a child or two to dig in! One warm day a few years ago, I walked by and they had filled at least one of the sandboxes with water to form a kiddie pool! A thrill to all the smiling children on such a toasty day!

Or, play can simply be about having the space to chase a ball in the shade on an 80 degree day like we just experienced here, in April.

There are also areas for basketball and soccer that the ‘older’ kids are drawn to for fun. And, then for a less physically active time, the marionette shows are still presented on Wednesdays (no school day in Paris) and Saturdays are also tempting. When I took my young daughter, the show was highly vocally interactive with laughing, ooohhhs, ahhhs, all being bellowed out in unison by the attending children!

I’m not the only one who enjoys watching children at play. Look at this man, on the right, ‘on a mission’ with the help of his cane. Went right past the pétanque courts.

He had an endless number of places to land, yet this is where he ended up! Watching the children at play from a sort of shaded observer’s deck. 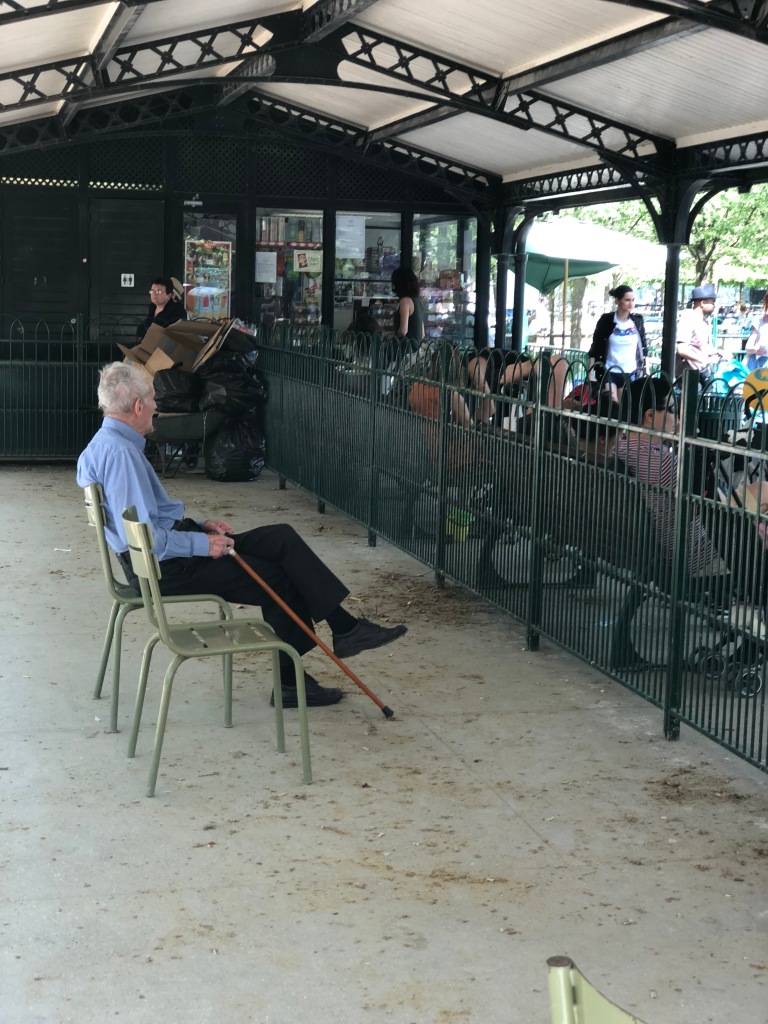 Pleasure for the young yet also for those leaning towards older! More to come….stay tuned for what the Luxembourg offers to the ‘taller’ full grown Parisians.