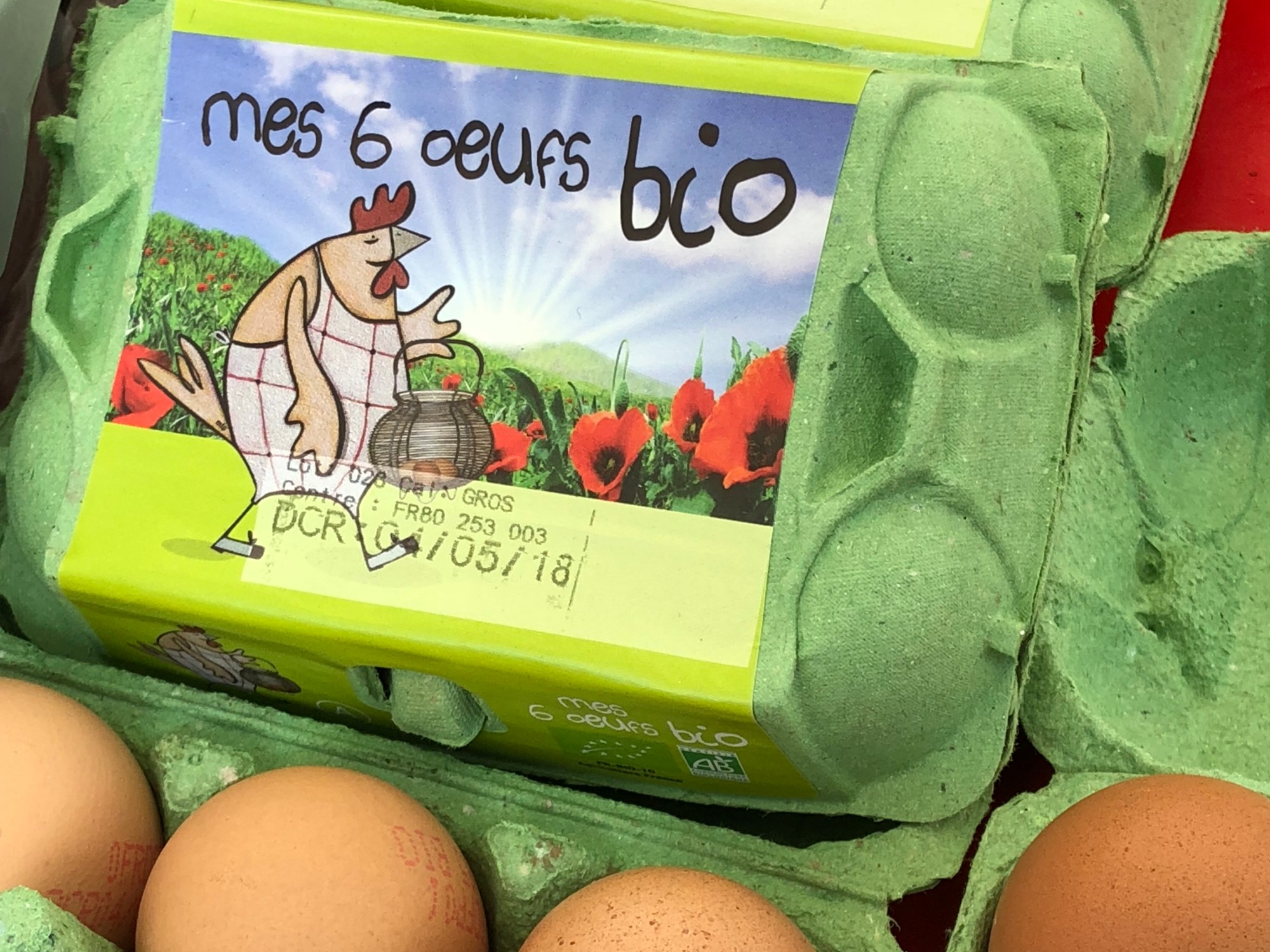 The organic market in my neighborhood (6th arrondissement on the Left Bank) is held on Sundays. It is a 15 minute walk for me with my shopping trolley towed behind me (I would call it a market/shopping ‘cart’). I use it, and, they are common to see on the streets of Paris, instead of a market basket or bag because of the freedom it gives me to purchase as much as I want, without sending my neck and back into excruciating pain, if I were to carry all of the food purchase weight in bags.

The brand I have is a Rolser (www.rolser.com). They have a variety of styles. Made out of microfiber, it is very lightweight, durable, wipeable, and yet, has sturdy wheels and a stand to keep it upright and in place when I stop wheeling it around. Mine is also handy, in that it also folds, so it takes up less space in my apartment. I use it for various heavyweight shopping trips–think printer bought at the FNAC chain store (selling electronic products and cultural event tickets) a mile away, for instance, or even going to one of my local grocery stores, if I am doing a big shop.

(Just note though: My local large grocery chain store, Carrefour, and Bon Marche’s La Grand Epicerie will deliver for a nominal charge. Also, each time I return to Paris, the grocery stores seem to have made room for more organic products. And, there are also smaller organic shops cropping up in my neighborhood too.)

The Raspail Sunday Bio Market is well-known and, more than not, crowded. By the way, ‘biologique’ is abbreviated to ‘bio’, around these parts, as you see on the egg carton in the above photo, along with the chicken farmer going to collect his/her eggs.

Here is the market’s website, which is in French, but you can see the ‘entry’ streets to the market (Cherche Midi and Rennes, as mentioned) as well as the hours they are open, for instance. http://equipement.paris.fr/marche-biologique-raspail-4515

And, yes, dogs are welcome…..right near the sale of bio wines! 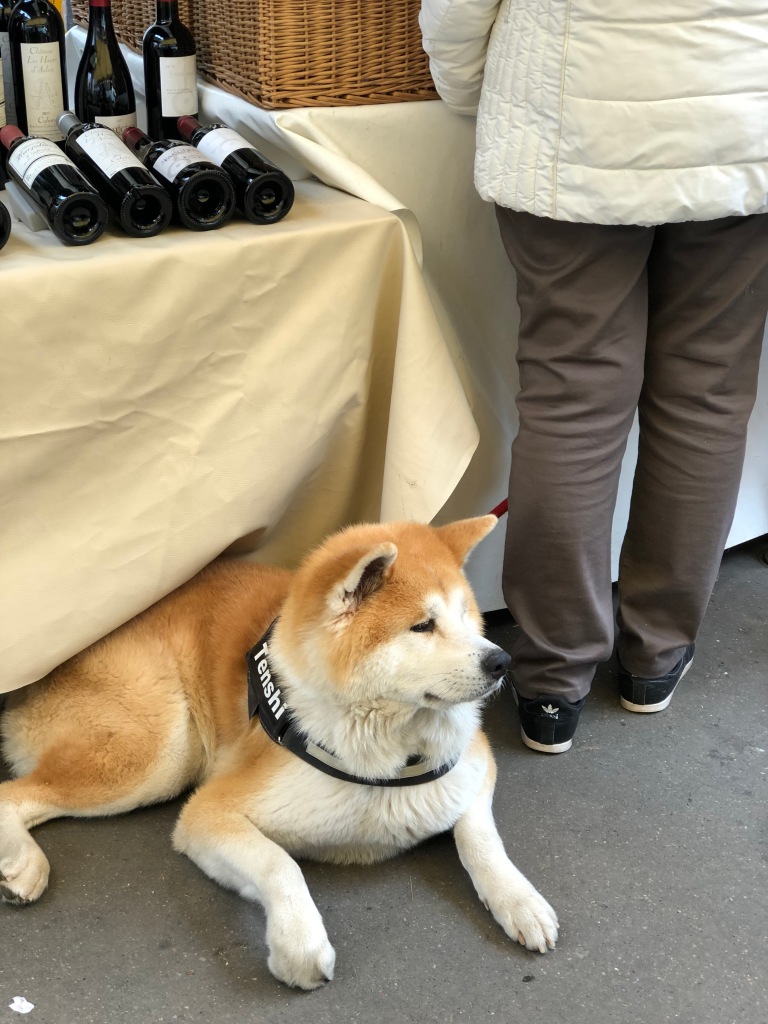 As well as children…..This older, patient, sweet sister was trying to help her younger sister (following suit with her patience and sweetness too) with the use of the cart supplied by one of the vendors. Dad was just standing by…. 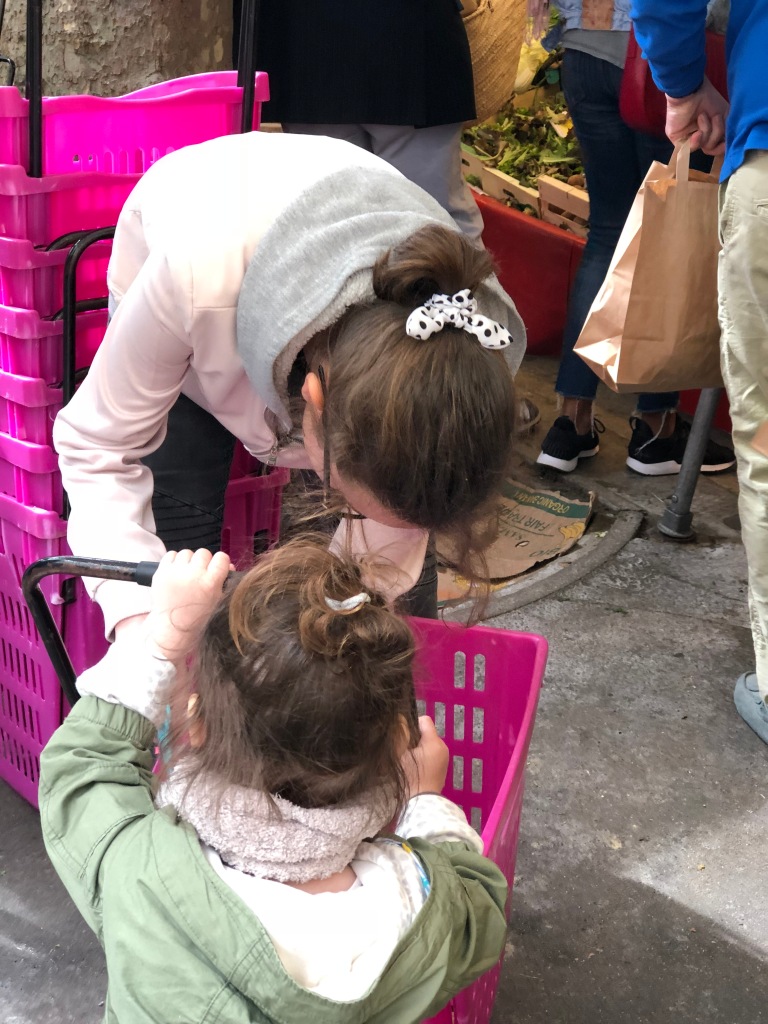 And, this woman was trying to dodge them! so she didn’t trip up the good deed being done by the older sister.

Just a few photos of what was ‘in season’ in April.

Asparagus is ‘de rigueur’ (fashionable) here in France and white asparagus is ‘oh la la!!’ (oh my!) and so is the price! 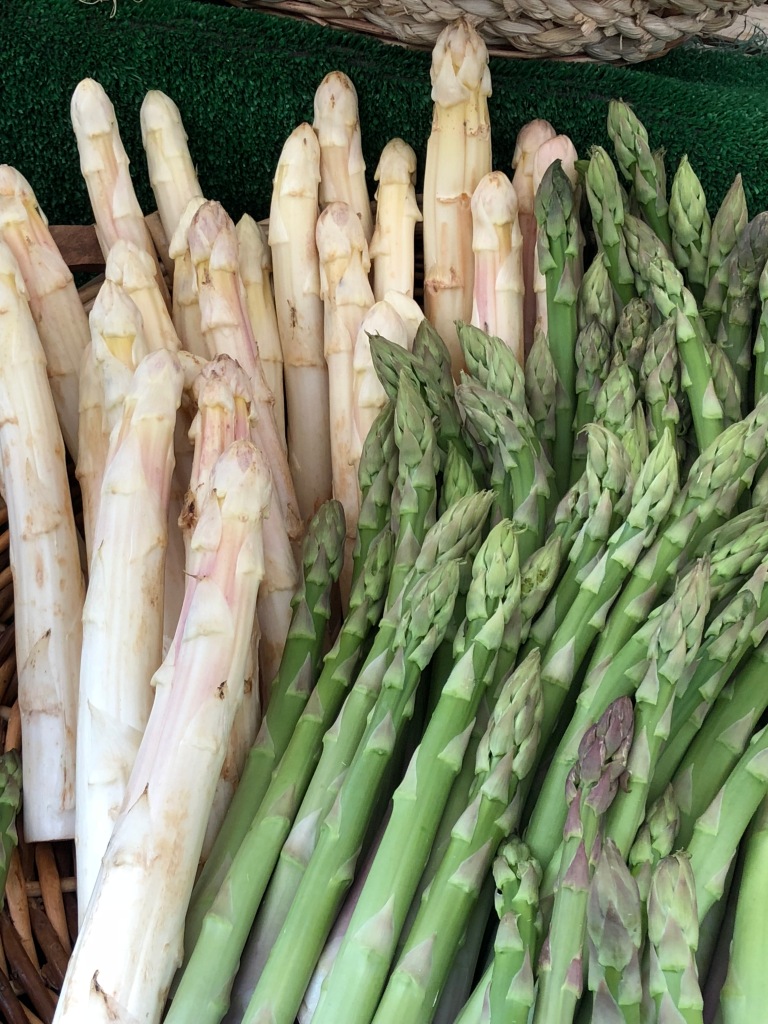 I have a crush (apparently in French, it is: ‘eraser quelque chose’–‘crush on something’, not someone!) on mushrooms. Look at the dirt! They sell them that way at the larger grocery stores too. And, they are fresh and flavorful…right from the earth to the mouth–well, with a little trimming off of the stems first!  The seller was telling me that these are little Portobellos.

The carrots looked so full of healthy vitamins and minerals…

And, I’m not sure why I didn’t take some artichokes home with me….

I took numerous vegetable and fruit photos…but I’ll stop there. Now…OH! the cheeses. This is just one of the numerous cases of dairy products–cheeses and yogurt and butters and…Well, I signed up for some bio butter. So, very unfortunately, I have been nondairy for decades. Too many customers to get some better photos of all the cases. 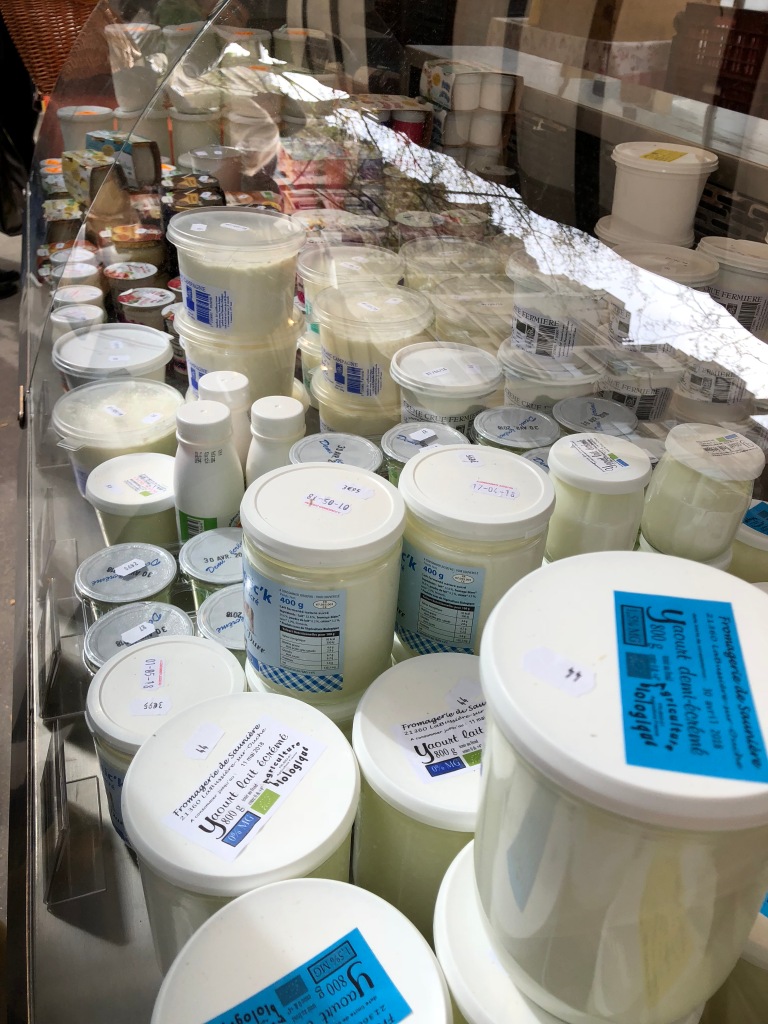 And the fish monger was running low on supply but I was able to get some salmon and pink prawns, which were ready for me to peel and pop into my mouth! Here in France, the pricing is in grams. But with fresh produce, for example, it is by the kilo (2.2 pounds roughly), so, at first glance, you can think that the fruits and vegetables are expensive, until you do the math. 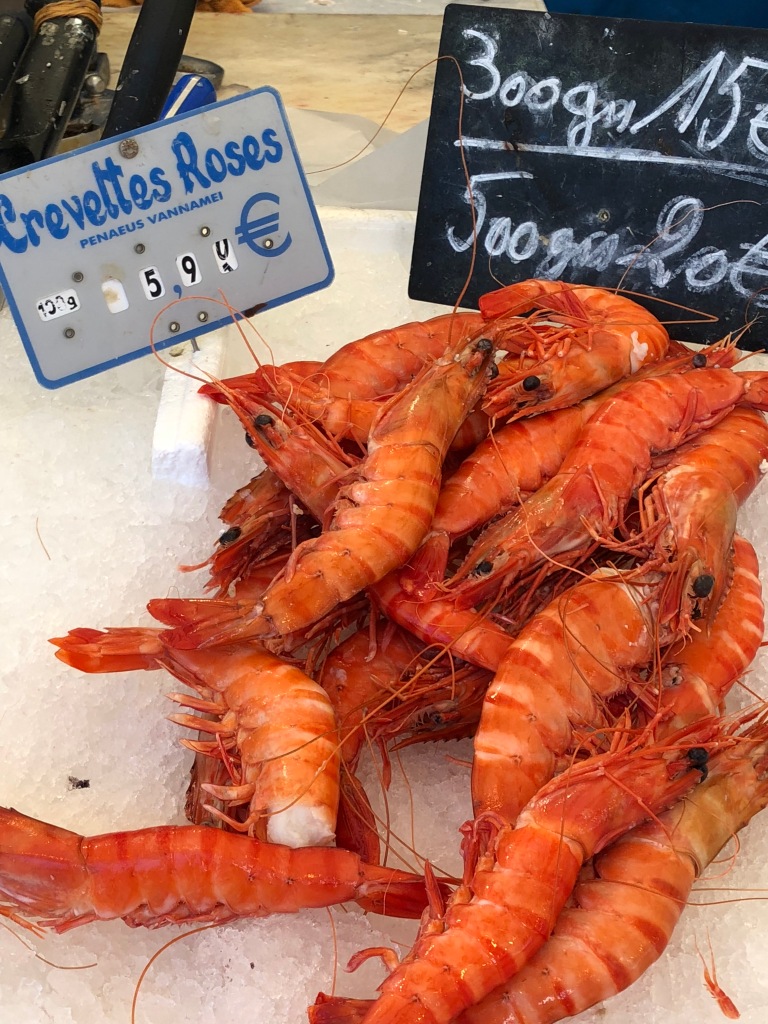 I didn’t buy a chicken but rather one of the rotisserie chickens–demi (half), yet, not until they were sure that there were enough left for me to have mine. Apparently, they had a list of names of interested customers, so I had to come back later and check to see if there were enough left. Now this item was double what I would pay for 1/2 an organic chicken in the U.S. but this vendor always had a line of people waiting for any and all of their products.

Leeks (blanc de poireaux) are on the menu…period…and delicious! And, the grated carrot salad (carrot rapee) is a staple, year round in France. 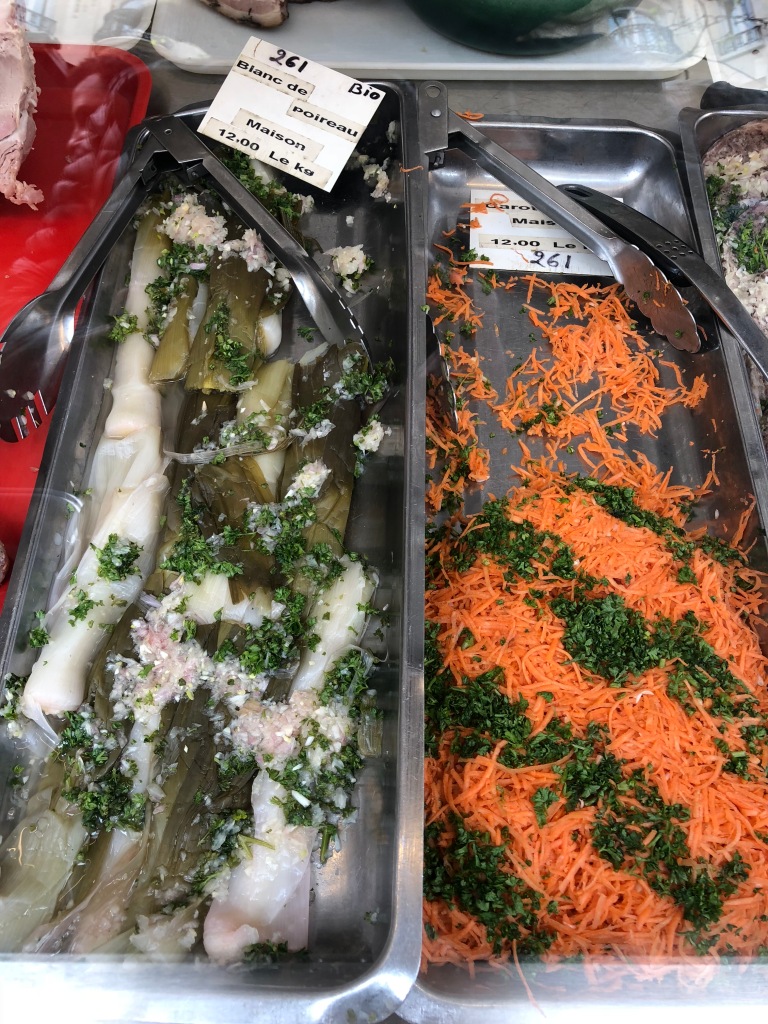 OK, one more fruit photo. I just thought these looked as pears should look…shades of greens to yellows to browns….maybe a little too crisp yet to eat but in a few days…the knife is ready to slice. You know the French do not bite into a whole piece of fruit ….plate and knife ready instead. 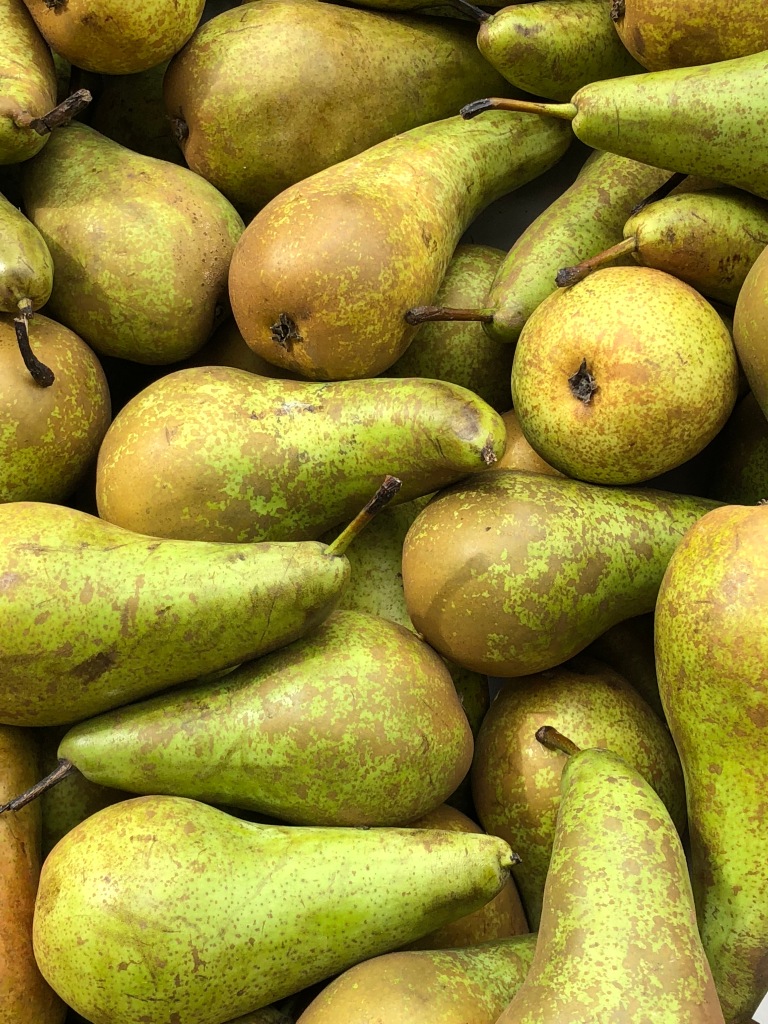 These sweets were new to me so I bought one of each to try. The left one is many layers of apple. Far more apple than cake with poppy seed. And very little sugar, I was told, because the fruit gives it the sweet and moisture. And, it did! The other treat was mainly sweet potato. Again, flavorful and moist! There were a number of bread and sweet treat options that were ‘gluten free’. 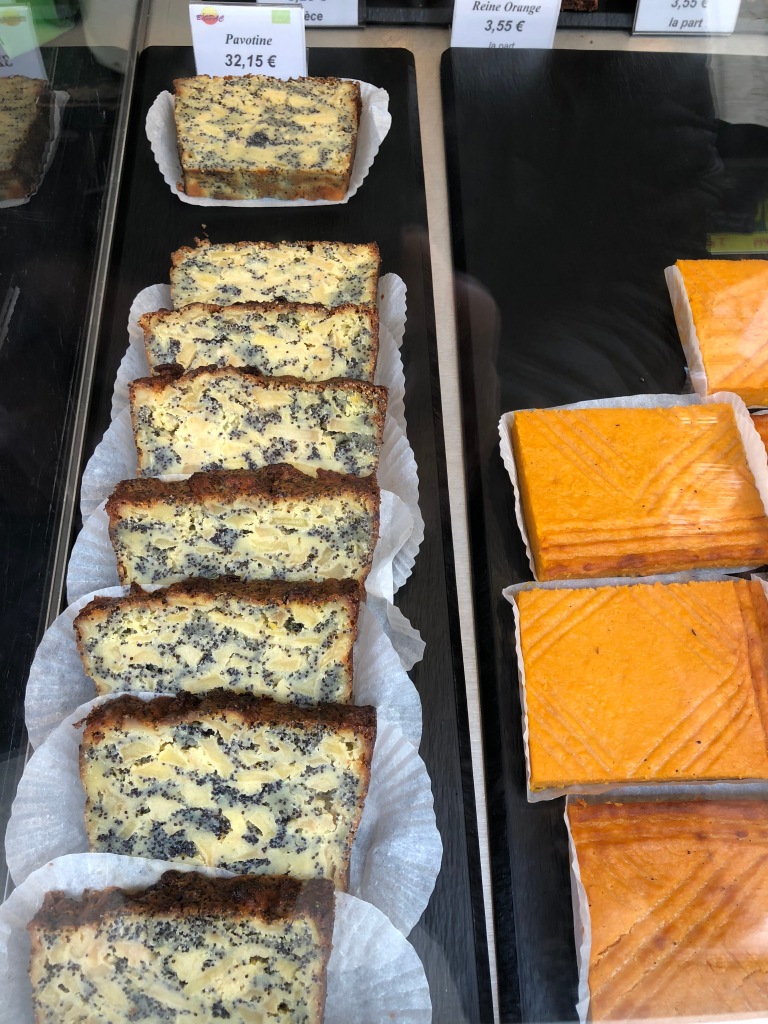 There were some other non food products for sale. If I had needed these I would have signed up for 6 kitchen towels for 20 euros so a little over $4 each. Simple and basic, but they do the job well.

And, finally I found these products attractive and, I guess I would say, handsome. 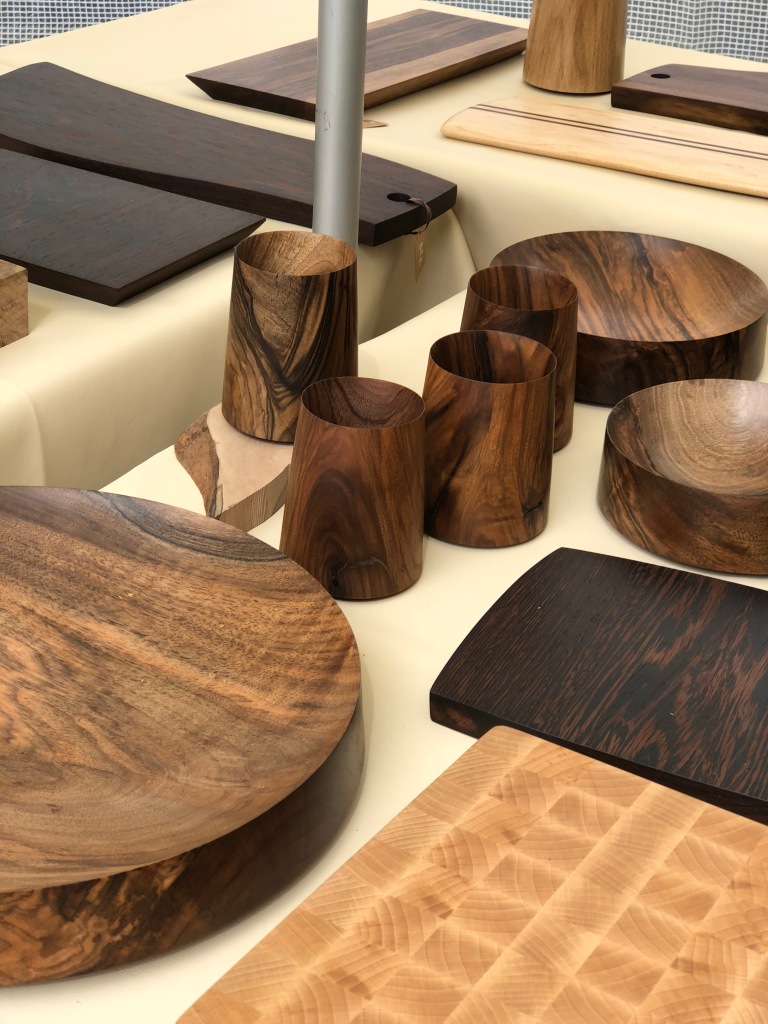 After I finished my market shopping, I made my way to Poilane for lunch. On Sundays, it’s brunch and, unfortunately, their boulangerie is not open. https://www.facebook.com/comptoirpoilane?utm_source=tripadvisor&utm_medium=referral

I ended up chatting with a young man who grew up in Palo Alto and is now working in Brussels. He came to Paris for the weekend, by train. (Palo Alto is one of the towns our family lived in while settled in the Bay Area of Northern California. In fact, our daughter was born at Stanford University.)

When we finished our conversation, he gave me a hug. I think we both enjoyed being ‘in touch’ with a fellow American (our good ole American hug style) who just happened to also have lived in the same neighborhood, once upon a time.

Now Poilane is another story for another post…For now, Bon appetit!

P.S. xxxO (which, for me, means 3 Provencal kisses and one good ole American hug) In Paris, it is just two kisses–1 one on each side of the cheek–but this has been the way I ‘sign off’ ever since I lived in France for a year, with the majority of that time in Provence.